Moffat is pretty much our favourite place to stop at during our trips north to Scotland.  Cafe Ariete in the market square of this lovely small town is the perfect place to break a journey at any time of day.  They make excellent coffee, have cakes, lunches and breakfasts and even good ice-cream, all just ten minutes drive from the A74(M).  After eating we often like to take a stroll around Station Park, opposite the car park, to walk off the cake / lunch / ice-cream. 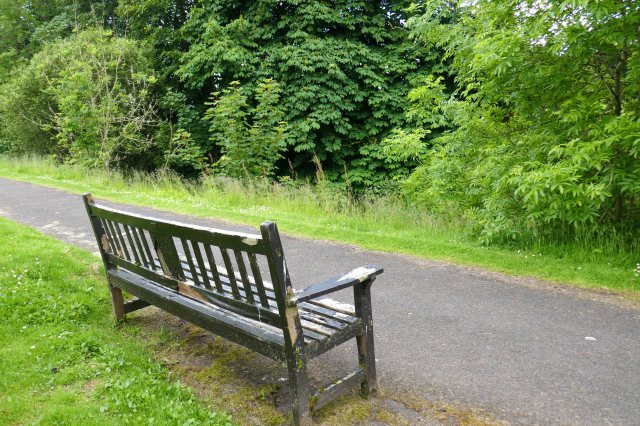 On one of these walks I stumbled upon this slightly neglected memorial bench to Helen Maud Kidston.  I was intrigued by the inscription, describing her as an artist and craftswoman and wanted to know more.  Unfortunately, 1978 is the days before the internet and so my search for information about Helen Maud Kidston’s life gives only glimpses of her life.  I am sure there will be someone in Moffat that has a fuller story of this interesting woman and her life.

I did find that in 1912 Helen M Kidston, who was born on 17 September 1894, received a school leaving certificate from Govan Hillhead Laurel Bank School for Girls.  Further reference to Helen Kidston can be found in the self-published book, Somewhere in France: WW1 Letters of Lt Parr Hooper, American Pilot in the R.F.C./R.A.F, edited by Marian Sperberg-McQueen.  In this book Marian Sperberg-McQueen reproduces letters from Lt Parr Hooper, including one written in April 1918 from the Tarbet Hotel on Loch Lomond in Scotland.  He wrote, “That evening we had a fine dinner party at Mrs. Blackie’s. Besides Mrs. Blackie, Helen Kidston, and myself was a friend of Mrs. Blackie’s, a Miss Goodrow. Mrs. Blackie is a charming hostess and the dinner was great.”

Marian Sperberg-McQueen writes in her extensive footnotes, “I believe the family Parr met was that of James Burns Kidston, a Glasgow lawyer, and his wife, Alice Maud Kidston. Their eldest daughter, Helen Maud, who was about three years younger than Parr, had gone to school in Kent; and it was perhaps during her time in England that she came into contact with the Whitings. The Kidston family lived in Hillhead, the neighborhood around the University of Glasgow. The second daughter was Annabel Agnes Kidston, born in 1896; the third was Margaret Hedderwick Kidston, probably born in 1901.”

Looking for more information about Helen Kidston, who accompanied Lt Parr Hooper to the dinner, Marian Sperberg-McQueen goes on to tell readers that the youngest Kidston daughter, Agnes Annabel (1896 – 1981), “studied art in Glasgow and Paris, and at the Slade School in London. In 1936 she joined her sister Margaret in St. Andrews and became an active member of the arts and preservation communities there. She taught in a number of venues and exhibited her paintings and woodcuts in galleries and solo exhibitions. Additionally she created illustrations for various publishing undertakings ranging from poems by Matthew Arnold to the Chambers Encyclopedia.”

She adds that Helen Maud Kidston died on February 11 1978 but, ‘I have found no further information about the eldest Kidston daughter, beyond the fact that she, like both her sisters, was unmarried at the time of their mother’s death in 1934.’ 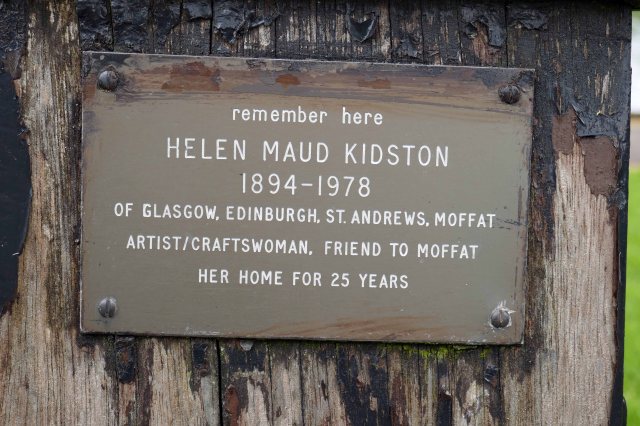 Agnes Annabel Kidston, the youngest of the sisters, was an accomplished artist and is still remembered in St Andrews.  She was the first president of the Art Committee of St Andrews and also a founder member of the St Andrews Preservation Trust.

The plaque on the memorial bench to Helen Maud Kidston tells us she lived in St Andrews, as well as Edinburgh and Glasgow, and it seems likely that perhaps she was there with her sisters Agnes and Margaret.  If so, she may have been there because of an interest in art and to learn new skills or she could have been inspired by the St Andrews artists to take up creative activities.  She then settled in Moffat for 25 years.