It was one of those perfect days when the sun shines and the ground is hard and frozen; the tops of the Lake District fells were covered with a fine layer of snow.  From the town of Windermere we had a brisk walk up the hillside to the viewpoint on Orrest Head to warm up.  The climb got my blood pumping but it was cold on this exposed craggy top in the wind.  Despite the cold you can’t resist taking in the panorama from Orrest Head and we weren’t the only people out enjoying such a fine day.  The 360° views to the blue water of Windermere on one side and the Kirkstone fells on the other were stunning.

On the path up to Orrest Head above Windermere 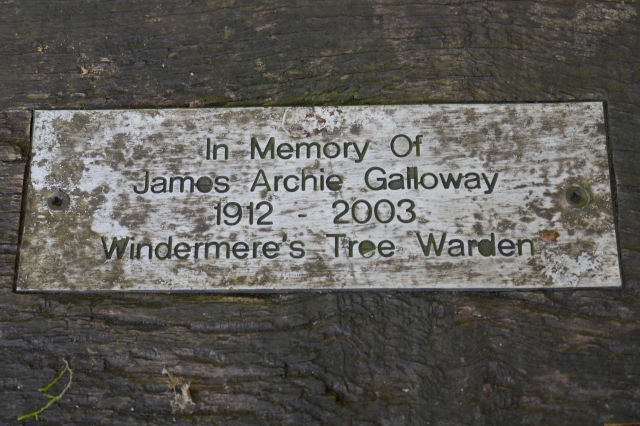 If you’ve never been to Fleetwood I suggest you take a look at this Lancashire gem.  I have certainly had a soft spot for the coastal town of Fleetwood [north of Blackpool] for many years.  The town was planned and built from scratch in the 19th century and retains a gentile air.  The promenade has wide open views across the Irish Sea, the little ferry still runs across the Wyre to Knott End and you can stroll up to the top of The Mount and think back to the days when this area was just sand dunes.  We had walked along the seafront to the modern observation tower at Rossall Point and chatted to the friendly and knowledgeable bird watching volunteers there, returning through the Marine Hall gardens.  The Marine Hall is on Fleetwood’s waterfront and was built in 1935.  It was February and the gardens were tidy but didn’t look their best but I immediately noticed this memorial bench to Ian Munro.

Ian Munro was Head of Culture, Leisure and Tourism at the local council.  He died suddenly in the early days of 2017.  The memorial bench looks over the gardens of Fleetwood’s Marine Hall and tells me that Ian Munro’s hard work and dedication was appreciated by his colleagues and the people of Fleetwood and he is very much missed by them and his family.

in loving memory of Ian Munro whose legacy lives on at Marine Hall and in the treasured memories of his family, friends and colleagues

Blackpool promenade in the sunshine is a wonderful place for a walk.  We had planned to take a tram but it was so sunny we opted for the fresh air and walked from Squires Gate to Blackpool Tower.  Blackpool has tidied up its seafront in recent years and if you haven’t been for a few years you wouldn’t recognise it today.

Along the way I found this memorial bench to Harry Jones.

The seafront at Blackpool near the Pleasure Beach

Harry Jones, a 20-year-old student, died tragically on 13 January 2013.  Harry Jones is described with love and warmth by his family and friends.  He was a bright young man who had a promising future and it is clear from the words of those who cared about him that this ‘Engaging, witty, polite and infectious’ young man will be very missed by his family and friends.  At his funeral friends described him as ‘Caring and loving’ and ‘The life and soul of the group. He will always be in our hearts and never forgotten.’  The heartbreak of losing a son and brother in such a sad way is hard to imagine.

I sat on the bench to Harry Jones and thought about this young man and about other memorial benches I had picked out that remembered someone who had died far too young.  As I so often do on these occasions, I also thought about my own dear friend who died when we were both at school and she was just 14-years of age.  My own experience has taught me that Harry Jones’ friends will never forget him and some of them may take away the lesson that every day we are alive is precious.