We often stop off in the pretty Scottish town of Callander on the River Teith on our way to northern Scotland.  This isn’t just because it has a useful large car park, Callander marks the boundary between lowland Scotland and the Highlands and it has a great bakery, making it a perfect place to rest and stock up on scones and pancakes before continuing in to the spectacular scenery of the north.  We stopped in Callander last summer on our way to Orkney and the North-East of Scotland. 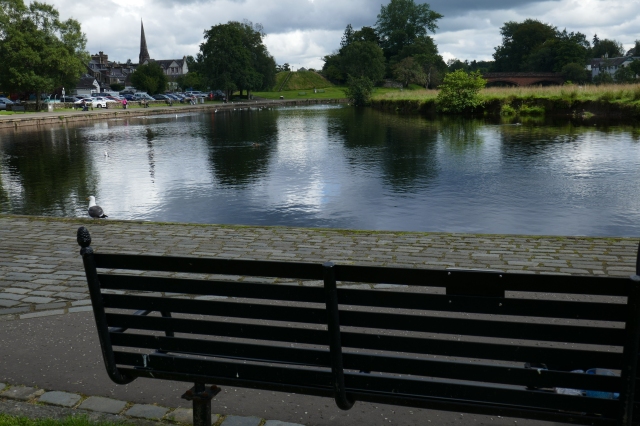 Looking over the River Teith in Callander

After making a brew I took my mug out to the benches by the river and found this delightful memorial bench to Tony Ffinch.  Tony Ffinch died suddenly at the age of 74-years.  I learnt that Tony Ffinch was active in his community as a local councillor in Callander from 2000 until 2012 and as a Rotarian.  He also had ran a bed and breakfast in his home town of Callendar.

Tony Ffinch’s community activities included being appointed to the Loch Lomond and the Trossachs National Park Authority, and being involved in Stirling Council’s Planning Panel and Regulation Functions Panel, Trossach’s Tourist Association and the Strathyre Association.

As well as so many civic duties the plaque on the bench commemorating Tony Ffinch expresses movingly how he is fondly remembered by loved ones and that he gave himself generously to his family and friends.  His obituary discloses that his death touched many loving family members.

Last summer we had a lovely few days camping at the lovely Lamb Cottage Caravan Park, which is truly a tranquil haven in the Cheshire countryside.  From the campsite we easily picked up the Whitegates Way, a 10 kms long traffic-free cycle route between Winsford and Cuddington that took us to the many trails in Delamere Forest.  We also enjoyed walking from the campsite around the network of paths around the pools and woodland of Newchurch Common, which are a haven for birds. 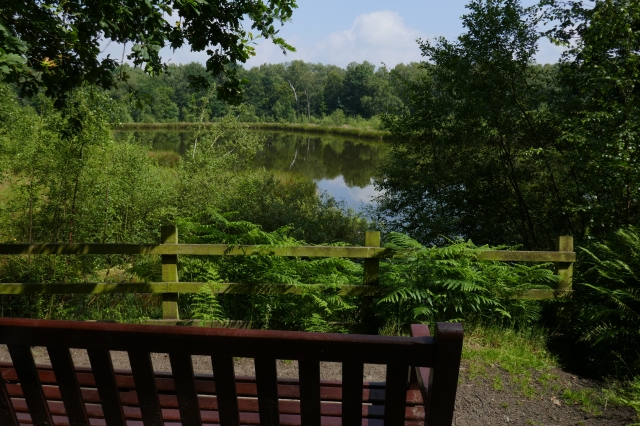 Looking over one of the pools at Newchurch Common

In Memory of Frank Bishop 1921 – 2009 Walking Pal of Jack, From All Fellow Warrington Ramblers

I was touched to read about the connection between these two ramblers on this bench.  Frank Bishop died more than ten-years after Jack D Hanson and is described as a ‘walking pal of Jack.’  It is entirely fitting that the Warrington Ramblers have remembered both these fellow walkers in a memorial bench that can be enjoyed by other walkers, including me. 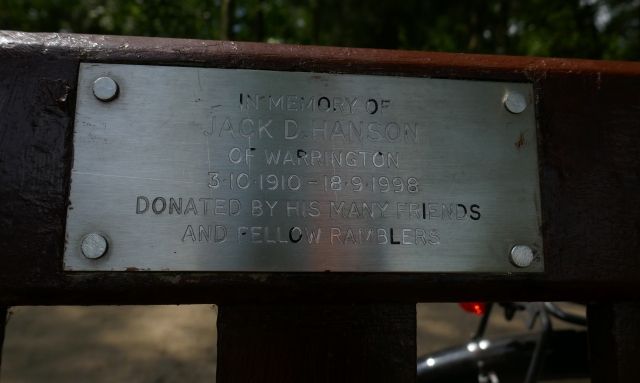 I am ashamed to say it wasn’t until 2017 that we eventually visited Port Sunlight on the Wirral in Merseyside and it was as lovely as I had been told it would be.  The village of Port Sunlight was built by William Hesketh Lever (1851-1925) to provide housing for the workers at his Lever Brothers factory [now part of Unilever] named after the Sunlight Soap made there.  Lever’s vision was for decent housing for his workers in a pleasing architectural style and he included bathrooms and running water in his houses, not something people took for granted at the time.  He called this ‘prosperity-sharing’ and aimed to ensure his workers felt secure and comfortable.  He campaigned for welfare reforms and a shorter working day for employees.  The village has many wonderful public buildings including the Lady Lever Art Gallery, dedicated to the memory of William Hesketh Lever’s wife, Elizabeth and the gallery contains some works of art from his personal art collection.

It was summer when we visited and after looking in the gallery we wandered through the wide tree-lined streets and colourful gardens.  The houses are picturesque, beautifully designed and carefully maintained and the peaceful atmosphere helps you forget the city of Liverpool is just across the river.  If like me you have been putting off visiting Port Sunlight then I suggest you get round to it as soon as possible.

Port Sunlight on the Wirral

There are numerous memorial benches at Port Sunlight, it is clearly a special place to many people; I picked out this bench in the gardens leading up to the war memorial.  It is dedicated to Francis McKeown who died at the impressive age of 95-years and who is described as ‘The Village Sweep.’  The bench remembering Francis McKeown looks over rose bushes and to the houses on Queen Mary’s Drive.  My research hasn’t revealed if he was the local chimney sweep or cleared up the litter in the village but I am sure there is someone out there who will know why he is so fondly remembered.